According to information, the first hardware industry organization in our country was established in Perak. It is known that in 1936, the Perak Chinese Hardware Dealers’ Association established a preparatory committee and was formally established in 1939. Among them, not long after the establishment of the Preparatory Committee, the Anti-Japanese Fund was donated to China, which was devastated by Japan at that time.

On 31st of August 1991, when the hardware industry from all over the country was invited to attend the 52nd anniversary dinner of the Perak Chinese Hardware Dealers’ Association, a number of regional leaders of the hardware, machinery and building materials industry talked at the same table about the prospects and difficulties of the industry. The concept and discussion of the establishment of the Association is here. At that time, the peers participating in the discussions were mainly from Perak, Selangor and Federal Territory and Penang.

At that time, the peers participating in the discussion all believed that it was necessary to establish a national peer organization to improve the quality of domestic peers, and at the same time, to strive for and safeguard the rights and interests of peers with a stronger organization.

Four groups launched a campaign to organize a general meeting

In the process of spreading the hardware machinery and building materials industry all over Malaysia, it has received enthusiastic and positive responses from the industry, which inspired the sponsors to formally organize the confidence and belief of the National Association of Hardware Machinery and Building Materials Dealers. Afterwards, the Preparatory Committee of the National Federation was announced, and the Preparatory Committee, with Tan Kean Beng as the Chairman and Tan Leong Hong as the Treasurer, started a series of planning work.

Subsequently, on 8th of December of the same year, under the oath of the then Deputy Minister of International Trade and Industry YB Dato’ Chua Jui Meng, the first board of director of the Malaysian Hardware, Machinery and Building Materials Dealers’ Association was officially established. Under the leadership of the founding president Tan Leong Hong, the foundation has been laid for the National Association of Hardware Machinery and Building Materials Dealers.

According to the seniors who participated in Tan Leong Hong's leadership team, because the general affairs was in the initial stage at that time, the leadership focus of President Tan Leong Hong was more focused on internal unity and system. The foundation can be said to be very solid.

In view of the development needs of the conference business and the recognition of Tan Leong Hong's leadership concept, he was again entrusted to lead the national industry in the second board of director re-election held on 22nd of June 1996. Dato’ Pheng Yin Huah served as the acting president, Leong Pak Tit and Chan Wai Yong served as Secretary General and Treasurer respectively.

Restricted by the charter Tan Leong Hong resigned after serving as the president for two terms, and Lim Kiam Lam, the president of the Selangor and Federal Territory Machinery Merchants Association, took over the leadership. When the general meeting was led by Tan Leong Hong, the internal theme had already laid a very solid foundation. Therefore, Lim Kiam Lam established a very strong relationship with foreign counterparts in the leadership of the association. At the same time, Lim Kiam Lam also led the association and the Philippine Iron and Steel Traders Association to become a Fraternities and Sororities, which has since strengthened the relationship between the hardware industry of the two countries.

Eleven genera will be distributed to the whole country

The 11 group members of the association represent more than 2,000 hardware, machinery and building materials industry players. The members are distributed in East and West, which further strengthens and recognizes the representativeness of the association.

Although it is said that the influence and representation of the association has spread across the country, or, so far, Terengganu, Negeri Sembilan, Kedah and Perlis have not yet had the same industry organization, so that the industry in the relevant states can face to face. When there is a problem, it cannot be directly communicated to the group to which it belongs, and then it can be resolved through the general meeting to all relevant parties. 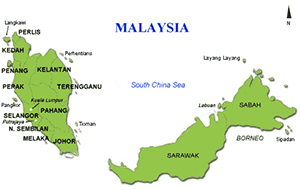 In view of this, under the leadership of President Dato' Pheng Yin Huah, the Association is now fully assisting the four states of Terengganu, Negeri Sembilan,Kedah and Perlis in the formation of the Association. The preparatory work of the relevant states is progressing smoothly, and the relevant state peers all agreewith the goal of President Dato’ Pheng Yin Huah.Hebelieves that the four states that have not yet established their own organizations will soon have their own groups and become the twelfth member of the conference.The thirteenth, fourteenth and fifteenth members, not only complete the national concept of the Association, but also promote us of the same industry in each state, and work together under the banner of the Association, defend and safeguard the interests and rights of peers.

After Dato' Pheng Yin Huah took over Lim Kiam Lam to lead the fourth board of director, the board of director's affairs were further improved. It is known that the leadership model of the founding president, Tan Leong Hong, is mainly to strengthen the internal organization. His successor fully demonstrates his excellent diplomatic skills, so that the association has established very strong and solid links with foreign counterparts. 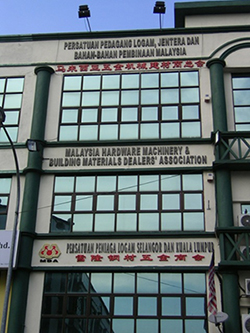 After Dato’ Pheng Yin Huah re-elected as the president, our policy was both internal and external, and continued the original policy of his predecessors, namely Tan Leong Hong and Lim Kiam Lam. At the same time, he also began to implement the long-awaited self-determination head quarter goal, and in just two years, raised more than RM1.5 million in establishment funds, and acquired a three-storey shophouse in Seri Kembangan, Selangor as a head quarter. At the same time, the official opening held on 7th of December 2003.

After the official opening of the new head quarter, Dato' Pheng Yin Huah has completed the task of purchasing his own head quarter. The association finally has its own home with the efforts of the national association. Dato’ Pheng Yin Huah not only continued to promote the establishment of hardware trade associations as soon as possible in the states that have not yet established an association and joined the big family of the Federation, but also organized a group to visit overseas trade associations that have not yet been contacted, such as the Siam Hardware Association, the hardware group of the Vietnam Chamber of Commerce and Industry, etc. The expansion of the overseas network of the association will make the progress of the association in line with the development trend of the global village.

When Dato’ Pheng Yin Huah was in office, he revised the Constitution, which had been cited for ten years, mainly because some of the regulations did not conform to the changes of current events. After the Constitution was approved, the term of office of the President has been changed from two four-year terms to two six-year terms, so that the President has sufficient time to lead the Association. Although the term of office was extended, Dato' Pheng Yin Huah still insisted on abdicating and letting the virtuous. He was appointed as an executive advisor in the subsequent re-election.

In the re-election on 12th of June 2006, Siah Kok Poay was officially elected as the president of the sixth board of director. Dato’ Lim Khoon Heng was elected as the acting president, and the history of the association officially opened a new page. Siah Kok Poay, who just took office, continued to visit the states that had not yet established affiliations and vigorously promoted the establishment of individual affiliations in order to realize the truly national concept of MHMBA.

Eleven associate members of MHMBA, East and West Malaysia, officially approved the acceptance of the Persatuan Pedagang Logam, Jentera dan Bahan-bahan Pembinaan Kedah dan Perlis as the twelfth affiliation of MHMBA at the fifth board of director meeting of the sixth board of director on 25th of August 2006. North West Malaysia Complete structure has been presented. As for Terengganu in the east coast and Negeri Sembilan in Central Malaysia, the Preparatory Committee of the Association has been established through various efforts. I believe that joining the big family of the Association is just around the corner.

President Dato’ Siah Kok Poay not only worked hard to develop the network of domestic affiliated associations, but also overseas trade associations will not be ignored. Following the previous President Tan Sri Pheng Yin Huah led a delegation to visit Thailand and Vietnam, Dato’ Siah Kok Poay set the target of the visit to Indonesia, a neighboring country. He will always communicate with six relevant local trade associations before and after the visit. The overseas network of the Association has been expanded again.

In 2008, the Federation once again completed the work of the national concept with actions. Sandakan Hardware, Machinery and Building Materials Merchants Association officially joined as the thirteenth affiliated association. In the same year, the association also formed a Fraternities and Sororities with the National Federation of Hardware Business Associations of the Republic of China when it warmly celebrated the 15th anniversary of its establishment, mainly to strengthen the relationship between bilateral hardware merchants.

At the Annual General Meeting, the association officially changed its chinese name to to enhance its image. 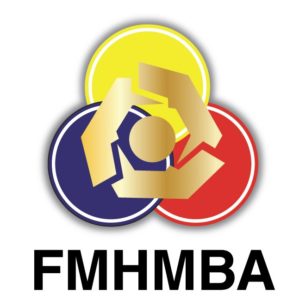 The Logo of the Association shall consist of a golden ball at the centre, three gold colour mechanical shapes surrounding the golden ball and three big cross-linking circles of red, yellow and blue colours with white interior circular linings.

(a) The golden ball represents association of members;

(c) The colour of the three big circles and the white interior linings represents the colours of Malaysia’s national flag.